An exceptional speaker, ultra-talented interior designer Madeline Stuart give a fascinating talk that kept her audience spellbound on October 18, 2019 at the Virginia Robinson Gardens.  Her lecture was based on her new book, No Place Like Home: Interiors by Madeline Stuart.

Education co-chair Cindy Fields introduced Madeline saying that since 2010, Elle Decor has included Madeline on its A-List as one of the top designers in the country. Madeline Stuart and Associates has also been distinguished by its inclusion on the AD100, Architectural Digest‘s prestigious list of the top 100 design and architecture firms.

Madeline said, “Virginia Robinson Gardens is one of my favorite places in Los Angeles. I revere old homes. Everyone has taken such good care of this extraordinary place and has worked to maintain and restore it, allowing future generations to appreciate it. I am very grateful to be here. Everyone is so elegant, dressed-up, and beautiful.”

Madeline grew up in a Spanish Revival home in Beverly Hills. “It’s unbelievable detailing clearly influenced my passion for design and architecture,” she explained. Madeline then described living in Beverly Hills at a time when it was like a small town. Because her family was in the entertainment business, she had many celebrity friends. She would see screenings of movies such as The Wizard of Oz, Singing in the Rain, and An American in Paris at her friend’s home. Madeline said, “Many years later, I had the honor and distinction of being able to restore and remodel the home of Cedric Gibbons, the art director of MGM for almost 40 years, who was responsible for those films.”

Madeline did not attend design school, but a friend of a friend recommended her to design the interiors of a young screenwriter’s home. From that successful commission, “My career was thus born. I was passed around young Hollywood,” said Madeline. She had many referrals and celebrity clients, among them Nora Ephron. In 1995, Elle Decor first published Madeline’s work, and in 1998, the magazine also featured her furniture collection which is made in the USA. In her lecture, Madeline focused on four types of architectural styles that are very prevalent in Los Angeles: Arts and Crafts, Spanish Revival, Italianate Mediterranean, and Streamline Moderne.

The first style, the Arts and Crafts, was very popular in Los Angeles from the 1900s to 1940.  The Gamble House, designed by Greene and Greene, in Pasadena is an example of this architecture.  The house featured in Madeline’s book is an extraordinary exercise in this style. It features elaborate walnut woodwork, all hand finished by very talented craftspeople. Referential, but not reverential, the home is a contemporary interpretation, showcasing Arts and Crafts furniture and pottery from all over the world. Madeline designed all the leaded glass doors, and took a pattern from an Arts and Crafts textile fragment, blew up the scale and had it reinterpreted  into a handmade rug.

The second style, the Spanish Revival, was influenced by Spanish Baroque and Mexican architecture. It is marked by Moorish influences, asymmetry, arched openings, extensive use of stucco and plaster, and wrought iron decorative hardware. Madeline said, “I am extremely fortunate to have been part of a project that was built from the ground up and which wanted to be recognized as an authentic house in the spirit of those built by some of the most famous Los Angeles architects, such as Wallace Neff, Gordon Kauffman, Reginald Johnson and Paul Williams.” The client asked her and architect Kevin Clark to be involved in the project.

This extraordinary house is so authentic in spirit that one does feel like it was built in the 1920s. It is filled with Spanish, German, French, and Italian antiques, contemporary art, and a showstopper of a marble floor in the entryway that was influenced by antique Venetian flooring. Another magnificent tour de force is the powder room, where Lord Frederick Leighton (a 19th century artist and collector)’s home in London, filled with Turkish Iznik tiles, served as the inspiration. Rather than using actual Iznik tiles that turned out to be prohibitively expensive or copies that looked inauthentic, Madeline collaborated with decorative artist Jean Horihata. On gessoed walls, Jean painted six inch square tiles with Iznik motifs, used grout between the squares, and glazed the walls with a glossy finish. She even chipped the tiles to achieve the antique look. The end product looks like authentic ceramic tile.

The third style, the Italianate Mediterranean, is actually a 19th-century interpretation of a 16th century Renaissance style that is characterized by Palladian symmetry, arched openings, low, flat roofs, and deep cornices. Architects Elmer Gray and Myron Hunt (who built the house at the Huntington Library) and Wallace Neff designed in this genre as well. Madeline showed an exquisite home reflecting this architecture. It is in a more formal style with French and Italian antiques as well as more contemporary pieces that Madeline designed. Spectacular hand painted and gilded Chinoiserie Gracie wall panels decorate the dining room.

A reaction against the overly ornamented features of Art Deco, the fourth style, Streamline Moderne, is marked by clean, horizontal lines, some curvilinear aspects and is reductionist in its approach. Madeline worked on the remodeling of Cedric Gibbons’ home built in this style in the 1930s. Kevin Clark enlarged the iconic house without compromising the original. The dining room has not changed from how Gibbons designed it. There are mirrors throughout the house — a tribute to his wife, the actress Dolores Del Rio, considered to be one of the most beautiful women in Hollywood at that time. The public spaces are quite grand, and Madeline replicated many design elements of the 20s and 30s and added popular colors from that era like apricot, teal, taupe, red, and puce. Madeline concluded her lecture by reiterating her love of restoration and renovation of iconic homes and interiors and her admiration for the Friends: “I am extremely grateful to you all for your gracious support of what I hold near and dear.”

After this beautiful and informative lecture, the guests enjoyed a lovely lunch. On french blue tablecloths, designer Andrey Yun of Return to Eden arranged the tablescape to pick up the colors of the cover of Madeline‘s book. Blush orchids in gold-rimmed vases surrounding centerpieces of orange pincushion flowers, berries, and succulents created a soft and lovely scene. Caterer Joe Monteferante served grilled vegetables topped with colorful edible flowers, an excellent beef tenderloin with a vegan caper sauce, a squash salad, chicken with leeks, a delicious carrot soup, and French apple tart with honey ice cream.

Madeline then signed her book, generously donating all the proceeds of the sale to the Friends of Robinson Gardens!

We are so grateful to our terrific co-chairs Patty Elias Rosenfeld, Cindy Fields, and Adrienne Horwitch for always organizing such amazing, superb, and not-to-be missed events! All the attendees had a fabulous time!

Post and photos by Linda Meadows
Friends of Robinson Board Member 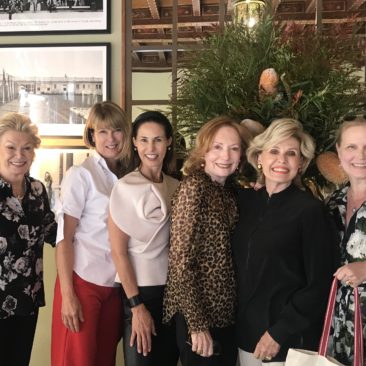 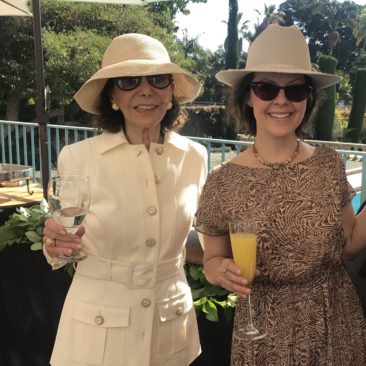 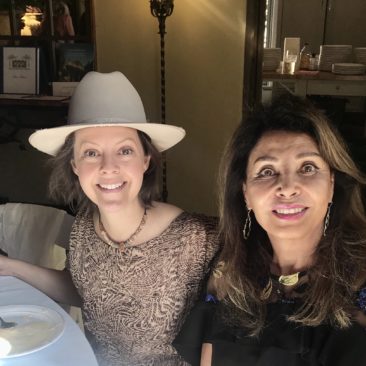