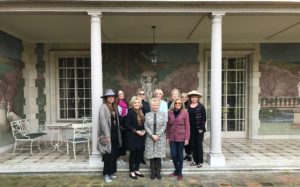 For so long, in fact, long after childhood for many, 1407 East Cabrillo Blvd was secretive. A sedately designed entrance gate – not redolent of the overly ornate wrought iron gate of the period announcing wealth – blocked public access to a driveway carved into a fast rising edge of the cliff of a Continent, where 3 Elements meet: Land, Air and Water. This magical point overlooks the wide Santa Barbara sandy beach, yet bore mystery in quiet elegance. Was it a home? An Institution? What was up there? Whatever and whomever, it was beautifully sited, and Lucky were those who wandered within.

Yes, the gate held a small sign proclaiming no trespassers…but now those very gates opened for us. The graceful winding drive rose up, and to our right was the sparkling Pacific Ocean and the Monet colored fog-infused silhouettes of The Channel Islands beyond. Twisting around a bend, there it was…the Sleeping Beauty of Santa Barbara now awakened. Were we in Nice, Golfe-Juan-les Pins, Antibes or Cannes…no, it is Heaven on Earth!

Serene silence greeted us, but for the wind rustling through the branches of ancient trees, no one around, but yet in town…what a setting. Sedate Glamour silently exudes from the limestone pattern of the edifice to the intricately carved surround of the front door, right down to the Mexican pebbled floral design radiating in a motor-court, recalling days long past when Anna (Hugette’s mother)’s limousine or Huguette’s small roadster with a rumble seat would pull up, bringing them home for intimate luxe splendor. It is then that this building becomes a house, a home created in a time when craftsmanship reigned supreme. This building, this house, is rather a cozy home for a Mother and Daughter and their staff. It was actually very small compared to the largest apartment on Fifth Avenue they shared, which was still even smaller than the townhouse on Fifth of Anna’s and  Huguette’s youth that had 121 rooms.

Upon her father’s death in 1925 at the age of 86, according to his will and a promise to his children from his first marriage, the Fifth Avenue townhouse was to be sold and profits split between his very adult children and his second family of two teenage daughters. Anna was bequeathed the original Bellosguardo in Santa Barbara, built of wood in Italianate style. Devastated, and tired of rumor-mongering and family squabbles, mother and daughter created a new Bellosguardo, incorporating familiar 18thcentury paneled rooms and a 19thcentury dining room, carved of a felled ancient Oak from the Sherwood Forest, with no two panels the same. They purchased and salvaged these elements from their own Fifth Avenue home demolished in 1927, once the largest house on Fifth. This Santa Barbara house was going to be their world.

Constructed during the height of the Great Depression, it employed hundreds for four years. Mrs. Clark decided to tear down her existing home — her impetus born of a desire to help those in need of work. It grew over time into a Memorial to her beloved daughter, Andree, who perished in 1919 from meningitis at the age of 17; she is everywhere within — in paintings, photos, and sculpture. Her death came when for the first time in her life, she was out of sight of a mother and father who were both loving and very private, while at a Camp for girls in upstate New York. It was the final blow to this small and reclusive, yet formidable family consisting of an older father who was one of the richest men in the World with his Copper mine and a much younger and beautiful wife, and their two beautiful sprite-like daughters. Mr and Mrs. Clark purchased and donated the Camp in honor of their deceased daughter Andree, and in doing so, created the beginning of the Girl Scouts of America.

Flash forward to the 1930s, Anna and Huguette were all that survived from a vanished world. Now with so many men unemployed and a desire to help, she took her enchanted beachside dream to another level when she chose Reginald Johnson as her Architect of choice. He was Society’s Golden Age architect, from Pasadena, fresh from having built The Santa Barbara Biltmore down the street. His appointment wasn’t out of the blue, for he came from an extraordinary background and family connection. He worked early in his career under Robert Farquhar, who was the first American to bring football to France when he studied Architecture at the Ecole des Beaux Arts in Paris. Farquhar then worked for Carrere and Hastings on the Frick and NYC Library on Fifth, before coming out West. In the 1920s, he went on to design Huguette’s brother’s library, the William Andrews Clark Memorial Library on Adams Boulevard in Los Angeles. His last commission was The Pentagon. The family connection couldn’t get any closer for he was known personally to the Clarks through Huguette’s cousin Walter Clark, who perished on the Titanic. His widow, Virginia Estelle Clark, commissioned Reginald Johnson to design an Italianate villa in South Pasadena in 1916, still standing behind the original tall ochre walls and now owned by Richard Tyler, the Internationally famous fashion designer of the 1980s and 90s.

This Santa Barbara architectural bijoux, built for the Ages even bears Steel exterior Shutters, hidden interior pocket screens, and doors for safety and privacy. Boiserie paneled rooms are filled with treasures of rare and priceless paintings depicting a now lost Hawaii, 18thcentury hand-painted fans with carved Ivory or Mother of Pearl Sticks, a porcelain bowl in Imperial Yellow on a table atop an Imperial yellow carpet from perhaps the Forbidden Palace in China (lest we forget the carpets donated to the Corcoran Gallery in Washington D.C. that sold for unprecedented amounts) down to a sublime pastel Pissarro in its Impressionist splendor.

This estate is breathtaking down to the details of gilded hinges on doors to its enchanted setting. A Sea theme runs through beginning at the front door, past the vestibule lined in limestone with a carved floral trophy above the Archway where on either side, are a cloak room and powder room. Once beyond the archway, you step into a long wide hallway horizontally connecting the public rooms. Amongst many favorite rooms is the Library, fully furnished down to books with a fabulous mantelpiece of inlaid rare marble carvings of shells, corals and children, and an early Waterford Chandelier. The Knotty Pine paneling has an overdoor with a magnificent carved double Rococo Shell motif like the famed ‘Shell’ bed at Houghton Hall. The Chinois hand- painted silk curtains now hang as of last month, after being stored since the 1950s.

Think Filoli in Woodside, the Frick in New York City, the Huntington in San Marino, and the Virginia Robinson Gardens in Beverly Hills. Another room worthy of mention is the period kitchen with original Frigidaires, Monel countertops and tiled walls in a period sublime green. Upstairs are bathtubs carved from single blocks of marble craned in when under construction, gilded faucets of Dolphins, Crystal Jars in mirrored niches that once held bath  salts and perfumes to 18thcentury Boiserie bedrooms with breathtaking views of miles up and down the coast.

So with a background laid for posterity, let ‘pictures speak a thousand words’. One word says it all –  Bellosguardo – the ‘Bello’ for Beautiful and ‘Sguardo’ for View. Thank you Anna and Huguette, both born to Beauty, both celebrated Life in their own inimitable way, and though sadness stepped in at times like it does to all of us, these two Acolytes worshipped faithfully at the Altar of Beauty, and their Love has left us a Legend for Generations of Californians. 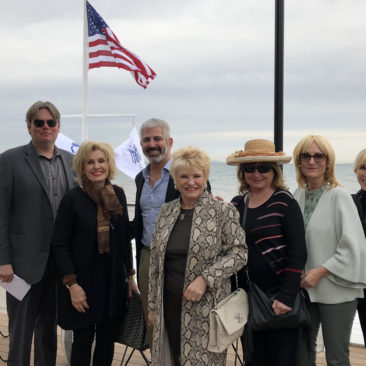 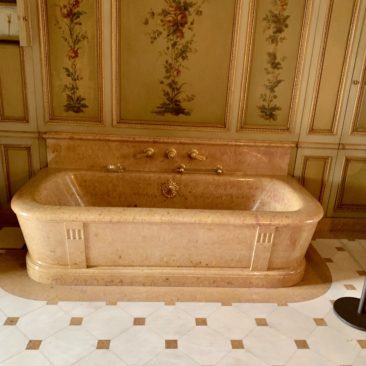 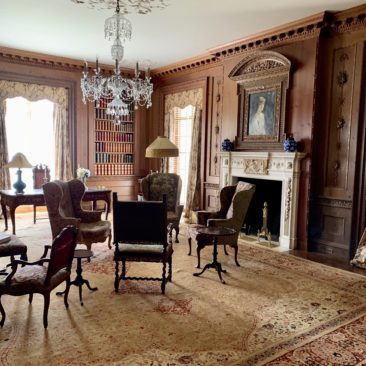 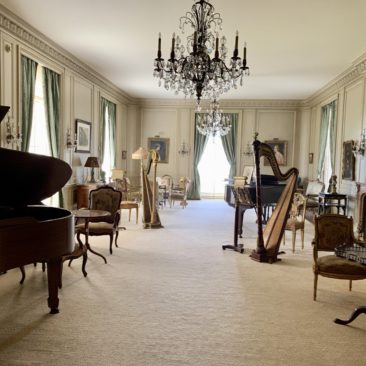 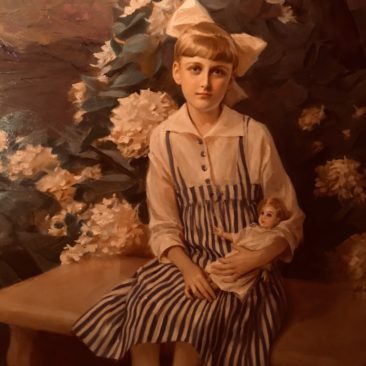 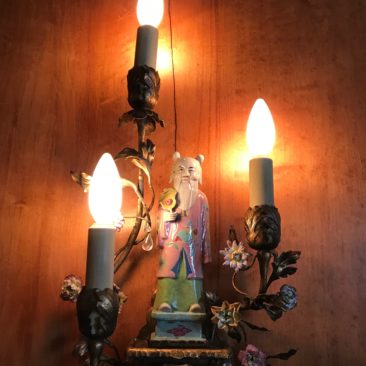 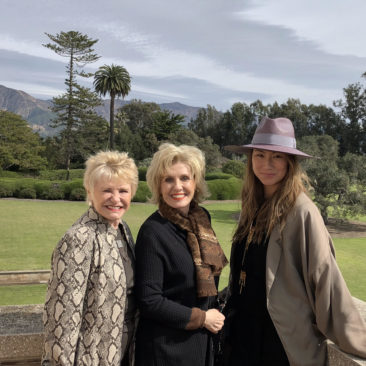 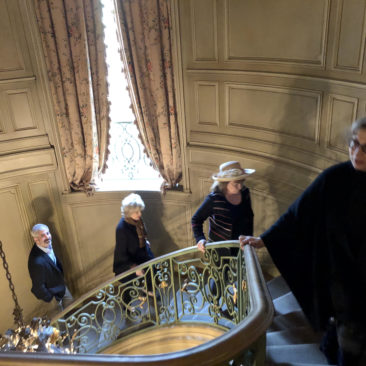