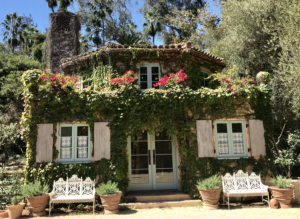 On October 1, 2018, thanks to Jeanne Anderson who organized this amazing excursion, the Fellows were treated to a delicious lunch and wonderful lecture by interior decorator Penny Bianchi at the Coral Casino Club in Montecito, followed by a tour of Penny’s extraordinary home. This event was postponed three times, twice for the fires in the area and the last time because of the mud disaster that not only closed the Coral Casino, but overwhelmed and destroyed most of Penny’s neighborhood.

Jeanne introduced Penny, saying, “Penelope Bianchi has been an interior decorator for 48 years. She was rearranging the furniture at her house when she was 4 on…so it is really longer!”  Her mother had exquisite taste and realizing Penny’s gifts, she exposed her early on to great design, and everything about taste and color and scale. A career was born when Penny decorated her own house, and her friends asked her to do theirs.

According to Penny, before the big rains came, she had a premonition. Although there was a voluntary, not a mandatory evacuation order, she had “an astounding, indescribable feeling — this reminds me of the Titanic…” She knew she and her husband Adam had to leave. As it turns out, if they would have stayed, they would not have survived. Out of 12 houses on this private, secluded lane, hers was the only one standing. The storm and mud slides wreaked havoc everywhere and severely impacted the garden, garage, and guest house. Fortunately, the mud did not infiltrate the main house. After nine months of restoration and renovation, Penny and Adam were at last able to return.

Penny welcomed the group into her magical abode, a one-bedroom enchanted jewel of a French house, full of whimsy and the most wonderful juxtaposition of exquisite objects, paintings, furnishings, textiles, and gilded mirrors. Everywhere you looked, there was something special to delight in — a real feast for the eyes and soul. The loggia – with its open windows looking onto the garden, creeping vines, and painted panels depicting faraway lands with lush vegetation – is so welcoming and evocative that Penny spends much of her time in this room, although every part of this charming house is used, including an expansive living/dining room.

From a vacant lot with just a few oak trees (neighboring Oprah Winfrey’s estate), Penny created a “certified backyard habitat.” Wildlife abounds in this nature preserve. The lovely lily pond and native plantings attract ducks, quails, birds, bobcats, possums, and raccoons. With its ornamental gates, gravel pathways, olive trees, and chicken coop, one feels one could be in Provence. Two 18th century sphinxes depicting Madame du Barry (one of Louis XV’s mistresses) flank the doorway in the entrance. The outdoor dining area enhances the feeling of being in Southern France; one guest at a luncheon remarked to Penny, “I rent a house in Provence every summer — you don’t need to.”

Penny has created a unique and beautiful sanctuary that one never wants to leave. We are so thankful to Jeanne for this special event and to Penny (who is of huge fan of the Virginia Robinson Gardens), for graciously opening up her home to us — giving us great joy and an unforgettable, inspiring day.