Patricia Ward Kelly gave a very moving and heartfelt presentation of her life with her husband, famed dancer, actor, choreographer and director Gene Kelly at the Virginia Robinson Gardens on November 17, 2017. Charming, delightful and very engaging, Patricia captivated the audience at this sold-out lecture with her life story.

Patricia grew up in Fort Collins, Colorado. At Colorado College, she majored in English, and her specialty was Herman Melville. After graduate work at the University of Virginia, she was hired by PBS to do a documentary on Melville. She was then brought on as a writer for a 90 minute television special on the Smithsonian. The host/narrator was Gene Kelly, and “I had no idea who that was… and the irony was Gene hadn’t met a lot of people who didn’t know who he was,” Patricia related.  Although her father was a professor, and she grew up in an educated atmosphere, her parents were originally from farm communities in Nebraska and Kansas during the Depression, where there were no movie houses in the outskirts where they lived.  Hence, Patricia did not grow up with a history of movies.

When Patricia and Gene met in 1985 at the Smithsonian, she was 26 and he was 73, and despite the age difference, they hit it off. Etymology and poetry were their joint favorite subjects. They played word games and quoted poetry to each other. Gene spoke multiple languages and often read a book a day. Patricia said that he was “a wonderful mix of erudite gentleman and Pittsburgh street kid,” and that by the end of the week, she “was completely enchanted by him.” When he left, she still didn’t know who he was, until someone told her that Gene was really famous and to look him up at the video store.

Six months later in 1986, she heard from Gene. He wanted her to come to Los Angeles to work on some of his projects. When she came to Los Angeles, he then decided he wanted her to stay and to write his memoirs. “I was supposed to come out for 2 weeks to interview him, and we ended up getting married 5 years later in the process,” Patricia said. She was fortunate to have 10 years with him as his third and last wife. Gene passed away in 1996.

Gene and Patricia had a date night every Saturday night at Spago Restaurant when it was on Sunset Boulevard. Afterwards, they would go to the Peninsula Hotel in Beverly Hills, and listen to piano music, which would spark intimate memories for Gene. Popular music inspired him.  Gene and Patricia shared the same sense of humor and “he was terribly, terribly romantic,” Patricia observed. “He would wake me up to see the full moon from the balcony at night.”

Tall and graceful, Patricia credited Gene with teaching her how to stand and walk, and how to dress. He was like Pygmalion; “It was an education I never had,” she explained. In her family, reading Vogue magazine and caring about one’s appearance was considered frivolous. Gene told her that when he first met her, she looked, talked and walked like she just got off a horse.

Patricia then showed the audience iconic scenes from his movies. In 1951, when he danced and sang the memorable “Singing in the Rain,” he had a temperature of 103. Nevertheless, his dancing was breathtaking, and the cinematography and lighting were exquisite.

In the movie, Anchors Aweigh, where animation was combined with live action for the first time in cinematic history, Patricia said that “Gene was so far ahead of his time; he was the most contemporary thinker.” He was always thinking of how he could break new ground. Gene told her, “The hardest thing is to create something that is both timeless and contemporary.” Gene and his co-director approached Walt Disney with the idea of dancing with an animated figure. Disney called MGM and endorsed the idea, and it gave Gene the green light to dance with Jerry the Mouse. Gene was nominated for an Academy Award for the movie in 1945.

When Gene injured his ankle in a volleyball game, he could no longer star in Easter Parade, and Fred Astaire was brought out of retirement. People always assume that Gene was inspired by Fred Astaire. Patricia said that Gene had already created his own form of dance before he ever saw Astaire. In Easter Parade, since Gene had already choreographed most of the dance sequences, Astaire was dancing to Gene’s choreography.

Trained as an archivist with the Melville Collections, Patricia inherited Gene’s archives which she is cataloging to create a virtual collection. Her Instagram @genekellylegacy is a wonderful site, and don’t miss her one-woman show: Gene Kelly: The Legacy; An Evening with Patricia Ward Kelly at the Wallis Annenberg Center for the Performing Arts in Beverly Hills on April 18, 2018. It is almost sold-out, and presents an intimate portrait of this iconic star.

After the lecture, the attendees enjoyed a delicious lunch catered by Joe Monteferante in the Display Rose Garden. Once again, the tables, decorated by Education co-chairs Patti Reinstein, Ellen Lipson and Kerstin Royce were a ravishing delight. A pair of black shoes, reminiscent of the tap dancing Kelly was so famous for, was filled with red roses. They adorned the tables as creative centerpieces while cards depicting famous scenes from Kelly’s movies added to the nostalgic theme. Thank you to our wonderful co-chairs for such an enchanting event. We could have listened to Patricia all day! 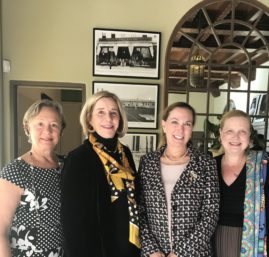 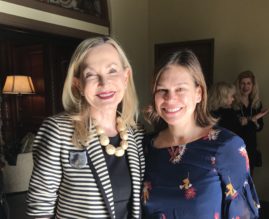 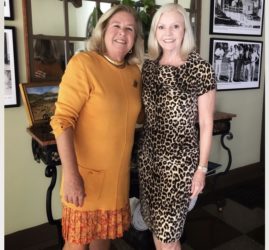 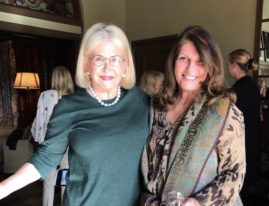 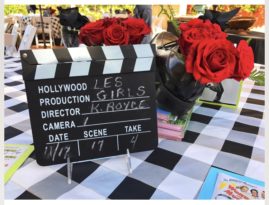