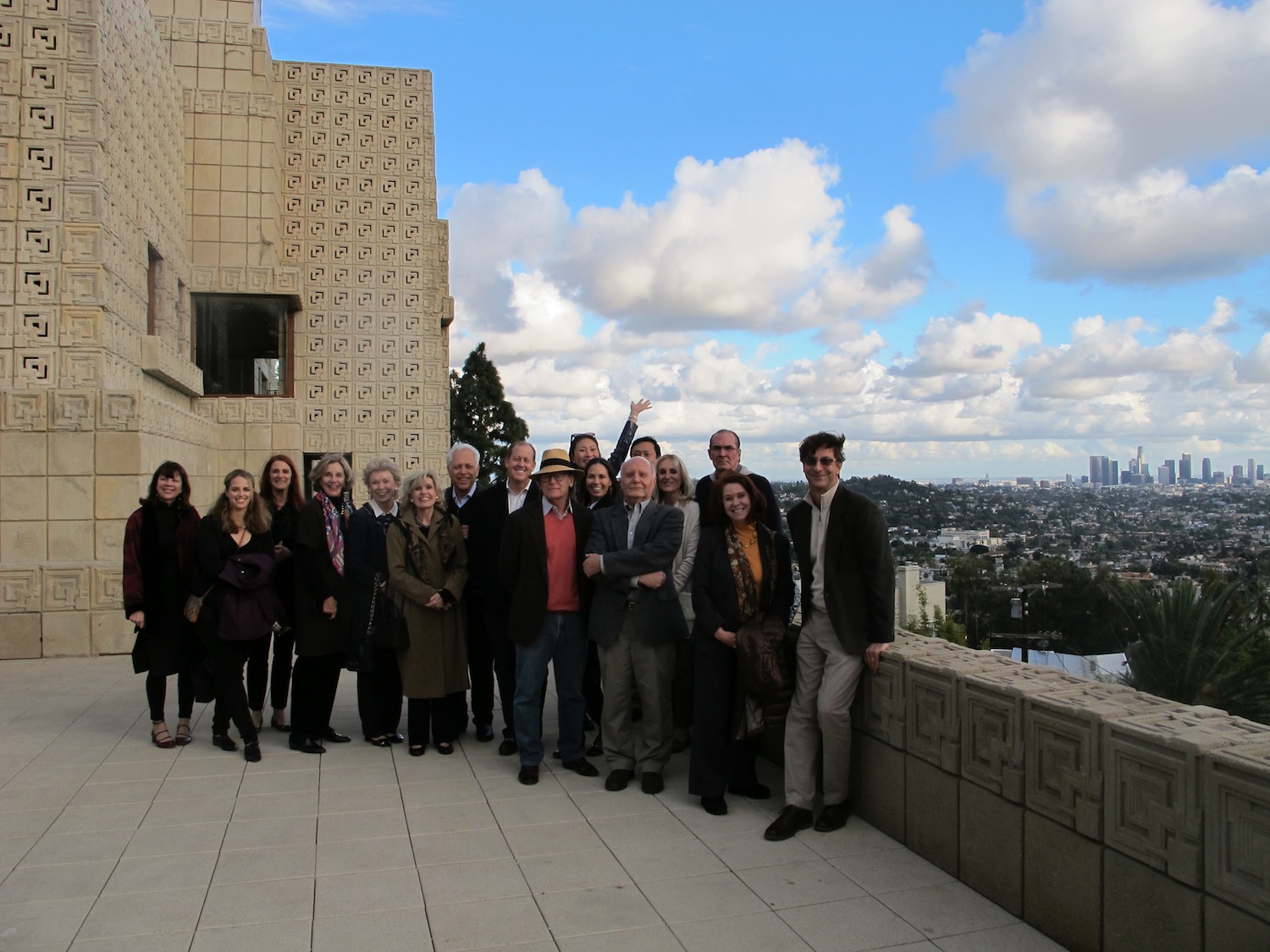 The Fellows visited Olive Hill, otherwise known as Hollyhock, where we were blessed with a beautiful, chilly, and crisp clear day. The guest curator for the event was renowned Frank Lloyd Wright and Modernist architecture scholar Kathryn Smith. Upon our arrival, we saw the majestic abode designed for the daring Aline Barnsdall, who raced cars, had oil fields, and traveled the world, extensively pursuing the arts. She commissioned from Wright an estate for the hill that she envisioned as a self-sustaining complex meant to house acting and literary thespians.
While Wright was in Japan for the Imperial Hotel, his acolytes Richard Neutra and Rudolf Schindler both worked on Hollyhock and later designed buildings with this new aesthetic. Hollyhock resembles a Mayan temple, with rooftop terraces and an outdoor amphitheater for plays and musicals. The living room features a fireplace with a stylized carving of Aline in one of her racing cars. The hollyhock flower so beloved by her was incorporated in geometric pilasters and moldings throughout.

We then toured Richard Neutra’s home in Silverlake upon the shore of Silverlake Reservoir. This home was truly experimental for its time, seemingly without support and built of glass. Modern louvered walls, similar to moveable flaps on wings of planes, were hydraulically powered to rotate to bring in the shimmering sunlight off the lake or to close for sleep. The hidden jewel is a sleeping pavilion on the rooftop that has a small reflecting eternity pool.

We arrived for a sunset tour and dinner at the famed Ennis house. Perched upon the crest of one of the famed Hollywood Hills, with spectacular vistas from downtown to Santa Monica, we enjoyed an elegant dinner, ending with a jewel-like dessert. Stenciled in cocoa powder was the ‘Ennis’ block pattern by Frank Lloyd Wright, which some say is an abstract design incorporating the tools used by the Knights Templar, such as the T-Square and Compass. Ascending up the wide marble steps, your eyes cast upwards to soaring ceilings.  All around are floating stone horizontal lines in sculpted blocks like hieroglyphs of an ancient civilization. The dining room features a mantle in a masterpiece of copper repousse evoking Quetzalcoatl.

These were the spectacular residences enjoyed by the Fellows on February 28, 2015, thanks to Mr. Ron Burkle and his family of employees at Yucaipa, Janice Jerde, the Fellows of VRG, and the Frank Lloyd Wright Foundation. 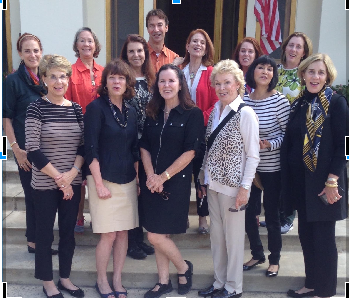 Nestled in the rolling hills between the coastal towns of Encinitas and Solano Beach is the city of Rancho Santa Fe. Originally established by the Santa Fe Railroad for eucalyptus, avocado and citrus farming, it gradually became a planned community for families seeking the tranquility of rural life. Sixteen Fellows began their visit at the Inn at Rancho Santa Fe, a former guest house designed by California architect Lilian Rice for the Santa Fe Railroad.

The first day we visited the enchanting home and gardens of Lani Freymiller. We were treated to an al fresco luncheon on Lani’s flower filled deck overlooking her pond and waiting canoe. Next, we were delighted to see the butterfly laced garden of Mary Rodriquez.  Then we went on to visit the stunning cactus garden and Santa Fe inspired home of Marilyn Townsen and Pam and Fred Wasserman’s Spanish Colonial Estate, which included a production scale olive grove, and finally the historic Osuna Ranch and Adobe. That evening the group dined at the Inn with outstanding wines provided by Jeff Hudson and Jay Wintrob.

Our second day was as full as the first. The “In the Garden” Garden Club of Rancho Santa Fe joined us for a morning coffee and lecture by well-known plant specialist, garden designer, writer, artist, and raconteur Pat Welsh.  Pat delighted everyone with amusing and informative anecdotes about gardening and gardeners. Her slide presentation illustrated the course of her life-long love of plants and color. After the lecture, Ruth Evans arranged a walking tour into the village to see two of the restored Row Houses along Paseo Delicias, originally designed by Lilian Rice. Each had an intimate secret garden behind its historically landmarked exterior. After lunch at Thyme on the Ranch, our group caravanned to the home of Dorothy Schoelen, overlooking The Bridges Golf Club. The Schoelen’s art collection was as spectacular as the 180° views from their home. Superintendent Mike Hathaway and Assistant Superintendent Phil Sauer shared many interesting aspects of golf course development and maintenance in regards to animal habitats and environmental challenges.

This trip would not have been possible without the gracious hospitality of the homeowners and the support of the “In the Garden” ladies. We are indebted to this remarkable group and look forward to welcoming them to Robinson Gardens this spring. Special thanks go to Jeanne Anderson and Margy Hudson for making it all happen. Also, thanks to Wendy Wintrob for the delightful favors.

A Walk in the Garden