Author and designer Hutton Wilkinson presented a beautiful and entertaining lecture based on his new book, Tony Duquette’s Dawnridge, on December 8, 2018 at the Virginia Robinson Gardens. In keeping with the theme of the lecture, some of the elegant attendees were wearing stunning brooches and jewels by Tony Duquette.

In introducing our speaker, Education co-chair Adrienne Horwitch commented on “the sheer force of Hutton’s fabulous personality.” With wit and exuberance, and eliciting much laughter from the audience, Hutton led us on a wondrous journey, unveiling the spectacular designs and transformations of Tony Duquette’s legendary home, Dawnridge.

Hutton related that as a young man, Tony came to Los Angeles in the 1930s and was employed by Bullock’s Department Store to design interiors that reflected the change of seasons. Because his family had fallen on hard times, Tony became the head of the family and needed to provide for them. He met the iconic interior designer Elsie de Wolfe who made him famous.

After he got married in 1949 to the artist Elizabeth Johnstone, he bought land in Beverly Hills and designed his home, Dawnridge — a 30’ x 30’ box. This magical jewel box of a home, reflecting his enormous talent and creative flair, became a sensation, and was featured in House Beautiful. In the 70s, Duquette acquired the house next door and transformed the lot into an exotic, lush garden filled with Thai and Balinese elements, dense vegetation, pagodas, pavilions, and a treehouse.

Hutton collaborated with Tony for 30 years in his business. When Tony died in 1999, Hutton had to sell many of the 17th, 18th, and 19th century antiques at Dawnridge so that the proceeds could be given to the heirs. Hutton purchased the home and showed images of the transformations of Dawnridge from the 40s to the 80s to today. Thanks to Duquette’s archives, Hutton has been able to buy much of Tony’s work back when he comes across it in stores and at auctions. He has also added very creative items he designed from the repurposing of found materials (such as using hubcaps instead of mirrors in a folding screen).

In addition, Hutton enhanced the exoticism of the garden by adding a lake with Koi, a pavilion with ornate Indian carved screens, among other inventive garden ornaments. A red and green Vietnamese wedding boat floats serenely in this ravishing and magical space.

“Dawnridge has always been a house for entertaining,” Hutton added. From the inaugural Bustle Ball or Ball Derriere held there in 1949 (where the women wore gowns with bustles), the home was always a magnet for celebrities and extravagant parties. Loretta Young and Mary Pickford were among the famous guests. Hutton has continued this tradition with many fabulous soirées held at Dawnridge. He showed images of an opulent and magnificent Indian themed party called “Return to the Raj,” where guests came from all over the world to attend.

Further adding to the estate, Hutton and his wife Ruth have bought a house next door whose glamorous interiors have been published in Veranda, Town and Country, and Harper’s Bazaar. Venetian antiques nestle among objects made of refashioned materials amid richly colored walls in the striking rooms. In the library, Hutton has displayed a collection of South American ancestral paintings that were his mother’s who was a Bolivian aristocrat. In 2007, the King of Spain gave Hutton his grandfather’s Spanish title, the Count of Alastaya.

After this gorgeous lecture, Hutton signed his book for his many admirers. The pool pavilion was bedecked with red poinsettias around the mirrors, along with urns, filled with red silk magnolias and ferns, all designed by our fabulous Andrey Yun. Tables decorated in red and green by co-chairs Adrienne Horwitch and Cindy Fields set the holiday mood.  Co-chair Patty Elias Rosenfeld created festive centerpieces with red poinsettias and shimmering ornaments.

In this warm and lovely setting, the group enjoyed a royal Christmas Tea catered by Joe Monteferante. An assortment of tea sandwiches, the most delicious savory and sweet scones, chocolate truffles and coconut panna cotta were among some of the decadent delectables served.

Thank you to our very talented and hard-working co-chairs for organizing such an entertaining and elegant event. What a great start for a joyous holiday season! 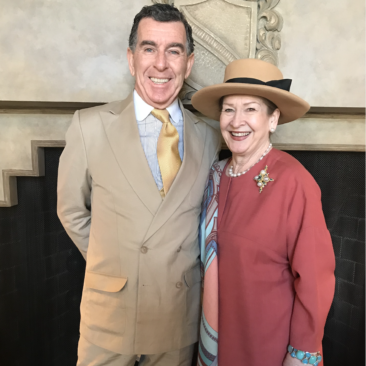