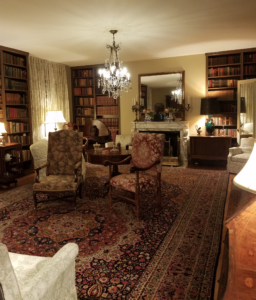 The Restoration of the Library at Virginia Robinson Gardens

The library at Virginia Robinson Gardens has recently been beautifully restored. We are happy to share the following interview with you with Superintendent Timothy Lindsay:

1.  Why did you decide to renovate Mrs. Robinson’s library?

The library was painted about 20 years ago. We were never satisfied that the colors were a good match to the historic hues of the library that Mrs. Robinson had originally painted.

2.  What work was done to bring it back to its former glory?

The detective work began by methodically removing layers of paint, which is the equivalent of moving back through time. The most significant discovery came when we removed a large mirror above the fireplace mantle and found that the original wall colors had been retained each time the wall had been repainted. We chose the color that works best with the bookcases that were being repainted in a brown walnut finish. This color choice resulted from our removing the shelves and discovering that the back edge of the shelves had never been painted. Consequently, we had the exact color to match.

The painting could only commence after our docent Tom and our contractor removed nearly 3,000 books from the shelves in the library. The books were cleaned as they were removed. After the painting was completed, all the books were replaced on the shelves in the same order and in some cases, disorder, which had been captured in the book inventory completed by the Getty interns several years ago. In addition to the standard information collected, such as the author and the title of the books, the interns painstakingly turned every page of every book and then documented the inscriptions made by either Harry or Virginia Robinson.

The most significant finding was in one book (naturally a gardening book), where an intern found an inscription in Virginia’s handwriting which says: “My first night in my new house August 23, 1911.” Also discovered were Virginia’s plans for her first party in her new home which included a menu and a guest list. Some years ago, the Friends took the menu and offered a cooking class in the kitchen of the main house for members to attend and savor the first meal that was served at the first party, at the first estate of Beverly Hills.

The library was commonly used by the Robinsons as a place to serve cocktails to their guests prior to dinner. In our photo archives, we see that Dorothy Chandler was often times a guest. She and Virginia joined forces to raise money for many causes, including rescuing the Hollywood bowl from bankruptcy during the great Depression, and competing to bring in donations to build the Music Center downtown.