We kicked off the new decade with a Robinson Gardens Fellows special program at The Broad museum.  It was a great beginning. On January 8, we took a guided tour of the special exhibition: ‘Shirin Neshat: I Will Greet the Sun Again.’ We learned about the background and remarkable work of Shirin Neshat. Unlike many other contemporary artists on display at The Broad and elsewhere, many of us didn’t know much about Neshat. Her work focuses on what it’s like to be an Iranian woman, and she expresses her views with her amazing photographs and videos.

Neshat was born in Qazvin, Iran, a small city two hours from Tehran in 1957.  She made her way to New York and has focused her efforts on visual art. She is known primarily for her work in videos and photography. Many of her pieces explore the relationship between women and the religious and cultural values and norms found in Islam.

At 17, Neshat was sent to the United States by her parents to complete her education.   She received a BA from the University of California, Berkeley. Neshat moved to New York and, following the Islamic Revolution in Iran in 1979, she was prevented from returning to Iran for almost 15 years.

Neshat worked in the arts field; however, she did not seriously pursue making art until 1993 when she was allowed to return to Iran. It was a critical juncture in her life and career, and she began making photographs and videos during this period, many in collaboration with singers, songwriters, poets and cinematographers.

Because of her art and its messaging, Neshat is “persona non grata” in Iran. Her given name is similar to that given to someone who was exiled from her country.  Due to the content and emotions provoked by her art, she was detained at the airport in Tehran and told never to return to her homeland. She continues to explore how religion, violence and gender are symbolic of stereotypes in Iran. Her work also explores how the West portrays women as submissive and how men are tied down by ideology.

In ‘Turbulent,’ a nine-minute video, Neshat displays two screens of the performances of a man and a woman. A single male singer stands in front of a packed audience of men with his back turned to them. The men wear the official government outfit of white shirts and black pants. The men show strength in their unified attire and support of one another by applauding at the end of the song. The woman is in the same auditorium, but no one is present since it would be prohibited to view her performance. The woman sings; however, Neshat is trying to show a woman doing the same things men do but how different her life is. The message – Iranian women have to accept their position and circumstances. Neshat shows the female performer wearing the traditional veil as she examines how women are outcasts. The veil covers the face and provides a barrier to separate women from their surroundings. The veil serves as a border, a boundary keeping others away.

Included in the exhibit is a case with ‘The Book of Kings’ describing the history of Persia written by Persian poet Ferdowsi in the 10th century. In Neshat’s copy, she found a red drop that she associated with blood. She then incorporated three series of large black and white portraits: “Masses,” “Patriots” and “Villains” with smatterings of red.

In ‘The Home of my Eyes’ photo series, Neshat’s portraits show a shift in her work; she adds writings of what home means to the subjects in the photographs. The words are the subjects’ voices. They are all frontal closeups of different aged individuals in similar clothing and poses with a dark background. Neshat then composed texts, which are calligraphically inscribed across the portraits, from both the sitters’ responses to the notion of homeland and from poems by Nizami Ganjavi, a 12th-century Iranian poet who lived in what is present-day Azerbaijan.

The art of Shirin Neshat is stunning and inspiring. After growing up in Iran and subsequently being prohibited from returning to her home country, she has turned adversity into expression that is unforgettable.

After touring the exhibition, the Robinson Garden Fellows gathered at the Garden Mezzanine at Otium restaurant for a 5-course family style meal. Before leaving, we passed around pieces of paper and asked everyone to write a message and/or wish for 2020. Then we randomly placed the papers in party favor bags with other themed items from our day together. It was a wonderful way to share a wish and celebrate the New Year. 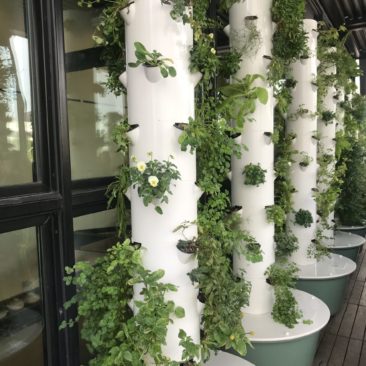