This month, we spotlight Marcella Ruble, a dedicated Friend of Robinson Gardens Board Member and VRG Historian, who has done so much for the Gardens. Along with Superintendent Tim Lindsay and Evelyn Carlson, Marcella wrote the book, Beverly Hills’ First Estate: The House of Virginia & Harry Robinson, with edits by Maralee Beck and Jamie Wolf. Marcella has also painted beautiful botanical illustrations, among them the “Beverly Hills Centennial Rose.” This pink and crimson rose, planted in Will Rogers Memorial Park, was created in honor of the 100th anniversary of Beverly Hills, and Marcella donated a copy of her painting to the city. 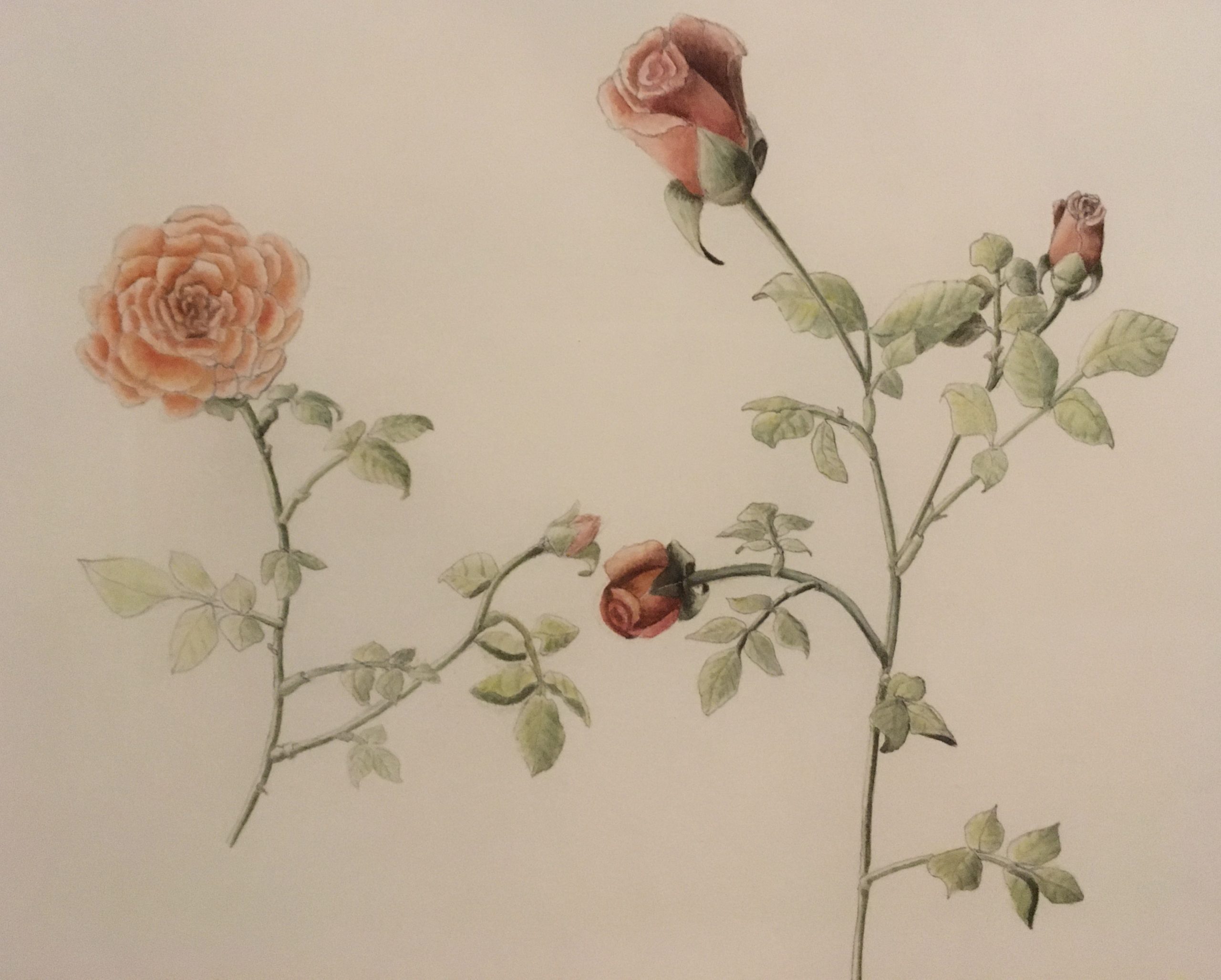 We asked her these three questions:

1. How did you first learn about VRG, and what inspired you to become a Friend?

Shortly after I moved to Los Angeles in 1997, I had a friend come to visit from Chicago. I thought she might enjoy going to this garden in Beverly Hills. My sister-in-law had told me the best way to learn about a new area and get involved was to act like a tourist and find out what the area had to offer. I liked gardens and loved the public gardens in the Chicagoland area. Although I didn’t know anything else about the Virginia Robinson Gardens, I had seen it in a book about unusual and often little visited places in the Los Angeles area. So, I made a reservation, and we went. We joined a tour of four others from Canada who were visiting the area. Ivo Hadjev gave us a tour because the person who was going to serve as our tour guide had gotten sick. I found Ivo fascinating, and since I was new to the area, I asked him about what else one could do at this place. He told me that they had a group of supporters, the Friends of Robinson Gardens, who yearly had two fundraisers: a Garden Tour and a Gala. I was going to be out of town during the Garden Tour, but I was available to go to the Gala. Ivo passed on my interest to buy tickets for the Gala to the Friends. I purchased the tickets and attended. As I did not know anyone else except for Ivo, the Friends kindly placed me at his table. In addition to Ivo Hadjev, the table included Marguerite and Tim Lindsay, who had recently become the County’s Superintendent for the Virginia Robinson Gardens.

At the Gala, I met a woman who would help me form a permanent relationship with not only Robinson Gardens, but the Music Center, the Blue Ribbon, the First Century Families (only as an attendee at their annual luncheon where I learned so much about Los Angeles’ interesting history), LACMA and its various councils, the Associates of the House Ear Institute and other support groups. Vi Nason was a force of nature who took great pleasure in getting people actively involved in enhancing Los Angeles’ cultural and social communities. Happily, I was sucked into her world and am a better person because of it. 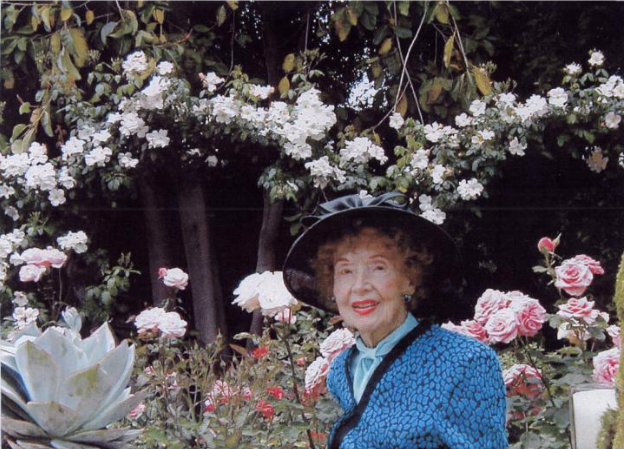 I took this photo of Vi Nason in front of the rose trellis she contributed to the Gardens in her husband’s name, Fred Nason, Sr.

2. What’s your role - How do you contribute to VRG?

Since I have transitioned from living in Los Angeles to Rancho Mirage, my involvement with the Friends of Robinson Gardens has become more limited over the past few years. As the Historian for the Friends of Robinson Gardens (FRG), I continue to work on researching Virginia and Harry Robinson and their impact on Beverly Hills and Los Angeles. In so doing, I have used the Getty Research Institute to accomplish some of this research, starting shortly after it first opened in its current location in 1998. It was there where I became interested in attending a graduate program in New York, the Bard Graduate Center for Studies in Decorative Arts, Design, and Material Culture. I must admit I had a two-fold interest; one was to learn more about the history of Virginia and Harry Robinson and their historic home, and the other was to write a movie script (how Hollywood!) about Bernard Berenson, the renowned art historian and Sir Joseph Duveen, the most important art dealer of the twentieth century.

I started school in New York a month before 9/11.That tragic event made it much more difficult to commute back and forth to Los Angeles. During the next three years, I wrote several papers and started documenting the collection of books in Virginia and Harry’s library as part of several independent study projects. Because I was motivated to help protect and preserve the Virginia Robinson Gardens, an important part of California history, I used this research to assist the Gardens in working towards achieving recognition as a museum. We began applying for and won several MAP Grants. These grants are designed to guide people in understanding the proper procedures, which are based in part on the Secretary of the Interior Standards for the Treatment of Historic Properties. We also applied for and received other grants to support programs that the Friends and Superintendent wanted to undertake.

Additionally, I ran the FRG Education programs for some years. Because I had the good fortune of meeting many wonderful scholars, we had the opportunity to hear from some great speakers during those years. We took field trips to the Getty Painting Conservation Department and the re-opening of the Getty Villa, as well as several private tours of Hearst Castle under the guidance of Victoria Kastner, the now retired historian for the Castle.

One of the first books I documented in Virginia Robinson’s library was a lovely Arts and Crafts style entertainment book in which she recorded some details about her parties and the menus her chef prepared along with who attended. On the inside cover she had written: “September 30, 1911, First night in our home."

As we approached the estate’s centennial anniversary in 2011, I suggested that it would be a perfect time to compile some of the information I had gathered along with contributions from many others and publish a book. To me, this was the “aha moment” of “if not now when?” We asked for donations and many of you came forward with contributions. I am proud to say that the only money spent was for the book designer and the cost of publishing and printing the book. So many individuals and institutions generously contributed their time, effort, and resources to help us put together Beverly Hills’ First Estate: The House and Gardens of Virginia and Harry Robinson.

In some small way I felt as though I was completing something that Vi Nason had secretly wanted to happen. I also felt that Virginia Robinson was looking down at us, incredibly pleased we had taken the time to memorialize Harry and Virginia’s beloved home and life spent there. She once was asked about how long it took her to complete the estate, and she replied, “a lifetime.” I hope to spend much more time still learning and sharing more about the Robinsons and the cultural influence they had on Beverly Hills and Los Angeles. What I have learned from this long experience is that all of us have a little something to contribute to make the world a better place. And each of you who read this have and are doing something to add to restoring, preserving, and otherwise creating a more wonderful cultural experience for us to pass on to those who follow us. 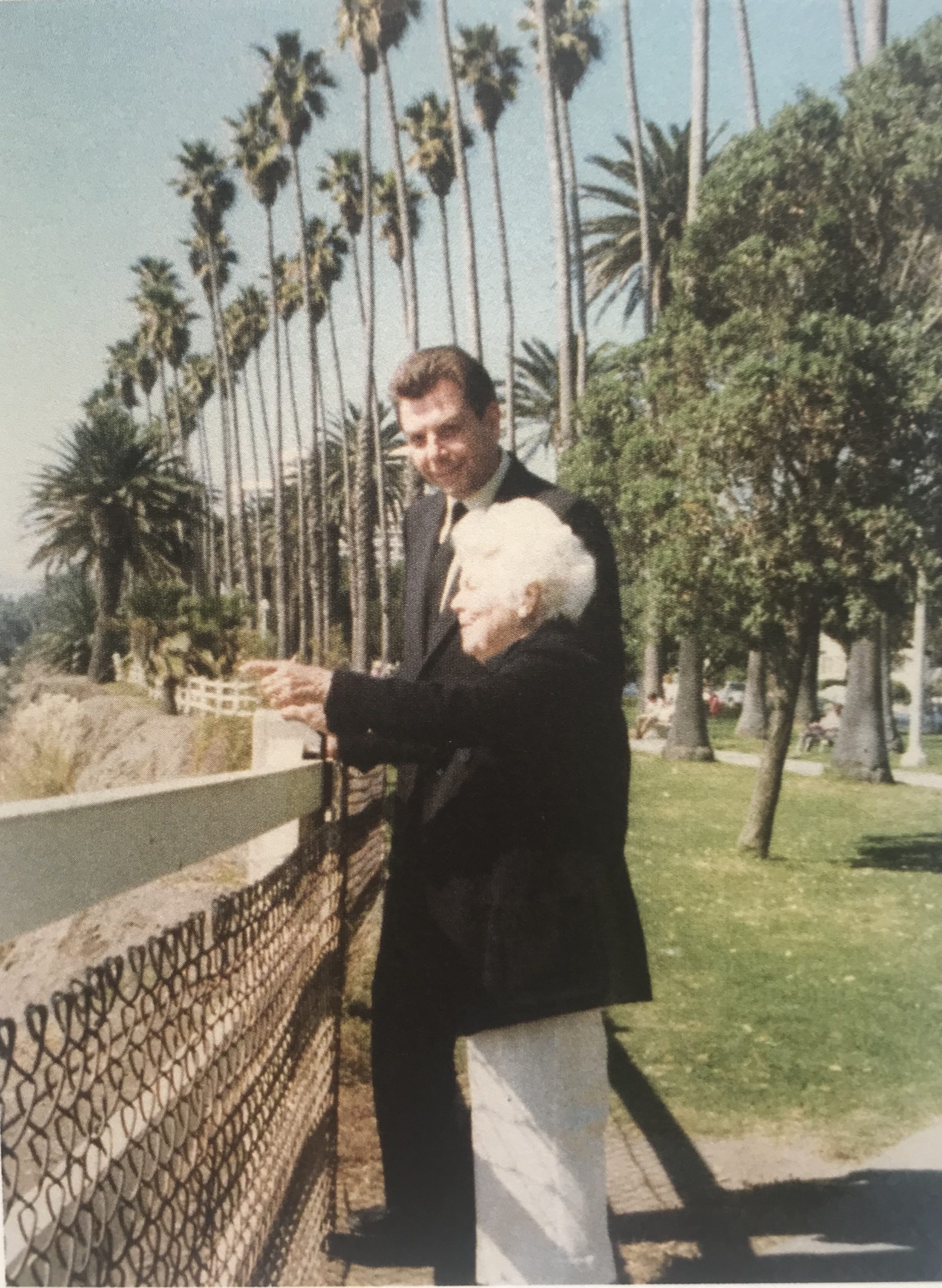 Virginia and Ivo in Santa Monica, looking out over the ocean.

3. Can you share a favorite VRG memory with us?

The most memorable moment for me at the Virginia Robinson Gardens would have to be the first yearly Garden Tour I assisted in as the Floral Designer Coordinator. Claudia Deutsch was the Room Designer Coordinator that year. She really taught me everything I needed to know and do. However, I was totally unaware of the impact the florists were about to create on the day of the Garden Tour. I was under the misimpression that the florists would put a couple of nice arrangements in each room since this was the first Garden Tour I would attend. When I walked through the door that morning, I burst into tears when I saw the most incredible floral display of insanely creative and over-the-top productions made by each florist.

To purchase the book, Beverly Hills’ First Estate: The House and Gardens of Virginia and Harry Robinson, please feel free to contact us at info@robinsongardens.org or (310) 550-2068.

Marcella Ruble was featured on The Joan Quinn Profiles talk show on August 23rd, 2012. Watch her talk about the book and Virginia Robinson Gardens in this video clip of the segment: