To a mesmerized audience, noted author and former historian of the Hearst Castle, Victoria Kastner, gave a fascinating speech on her latest book, Julia Morgan: An Intimate Biography of the Trailblazing Architect on May 6, 2022, in the Main  House at the Virginia Robinson Gardens. A fabulous speaker, Victoria was so knowledgeable and passionate about her subject that the Fellows could have listened to her all day!

Victoria highly recommended the review written on her book by Hannah Fish on April 6, 2022, for the Christian Science Monitor. Victoria said, “It is an excellent summary of my talk for VRG.”

On her first visit to Hearst Castle in San Simeon, California, author Victoria Kastner heard the tour guide explain that “an architect named Julia Morgan built this entire estate” – complete with interior design and landscaping – “but we don’t know anything about her.” Kastner’s curiosity was piqued, and she eventually became the official historian at Hearst Castle, the grand estate of newspaper magnate William Randolph Hearst.

Now Kastner has written “Julia Morgan: An Intimate Biography of the Trailblazing Architect,” which draws back the curtain on the first woman to study architecture at the École des Beaux-Arts in Paris in 1898 and the first female licensed architect in California in 1904. Lovers of art, history, and women’s studies alike will thoroughly enjoy this comprehensive account of a figure who not only overcame incredible obstacles to pursue her craft, but did so with considerable grace and inner strength.

Drawing upon firsthand recollections from Morgan’s family members, colleagues, and even recently discovered diary entries from Morgan herself (1872-1957), Kastner paints a well-rounded, engaging picture of her subject from both a deeply personal and professional lens.

While Morgan’s father, Charles, was a pie-in-the-sky businessman, chasing one unsuccessful venture after the next, she most likely inherited a sense of joyous persistence from his example, Kastner argues. Likewise, Morgan’s mother, Eliza, was a powerful role model, since Eliza had to pick up the pieces after Charles’ latest flop. She was the pragmatic, intellectual one in the relationship. It was the combination of these qualities that held Morgan in good stead when she traveled to Paris after college to study architecture.

The journey overseas was at the encouragement of her teacher and mentor Bernard Maybeck. He was an alumnus of the École des Beaux-Arts himself, having studied there in the 1880s. When Maybeck met Morgan at the Mark Hopkins Institute of Fine Art in San Francisco, he quickly took notice of her superior talent among his students. Morgan even helped design a few homes under Maybeck’s supervision before making the trip.

Morgan faced one difficulty after another in Paris. She had to jockey for entrance into a highly competitive program that (initially) did not allow women. Once admitted, she endured sexist taunting from her classmates. Expenses were tight and she slept little. While many male students took six years to finish the program, Morgan did it in three, and became the first woman to earn a certificate of completion. In all these instances, her quiet sense of purpose gave her the strength to forge ahead without bitterness, without diversion, and without telling her family that she was homesick.

When she returned home in triumph, Morgan carved out a prolific career, designing and overseeing the construction of approximately 700 structures. The impressive list not only includes private residences and women’s clubs – as was the primary focus for female architects of her time – but also a grand hotel, houses of worship, municipal buildings, school campuses, commercial centers, a theater, and a mausoleum. Visitors can still explore sites like the Grace H. Dodge Chapel and the Chinese Historical Society of America Museum in California, as well as some of the dormitories of Principia College in Illinois, which Morgan took on for Maybeck after site changes and labor unrest became an issue.

Victoria added, “Julia Morgan never married (which was not uncommon among career women in the first third of the twentieth century). Among thousands of pages of her personal correspondence and diaries, there is also no evidence to indicate that she had romantic relationships with other women. Her romance was with architecture--to which she devoted her life. She was also very involved in the care of several of her family members, including her older brother Parmelee (who died tragically of neurosyphilis in 1918) and her younger brother Avery (whose care was her lifelong responsibility, due to his many health problems, including early-onset dementia). She was also a devoted daughter and an attentive friend and mentor to many people.

Though most of her well-known buildings (including the Fairmont Hotel and the Berkeley City Club) are in the San Francisco Bay Area, she also designed many buildings in Southern California, including the Los Angeles Herald-Examiner building, the Hollywood Studio Club, and the Riverside YWCA. She worked extensively on projects for W. R. Hearst's companion, Marion Davies, including remodeling Marion's house at 1700 Lexington, remodeling Marion's MGM bungalow (which ended up being relocated to 910 Benedict Canyon Road), working on the interior design of Marion's Beach House (at 415 Pacific Coast Highway, which was designed by architect William Flannery in 1926)--as well as designing its stunning tile-lined swimming pool and Colonial-style guest house, both of which are still in use today at the Walter Annenberg Beach House.

One of Julia's last memos was written in 1948, discussing the installation of an elevator in W. R. Hearst's final residence, the Beverly House, at 1007-1011 Beverly Drive. Though she was apparently not personally involved with this project, it was carried out by contractors with whom she had worked on San Simeon. Her working association with W. R. Hearst lasted from 1903-1948, and involved literally dozens of buildings around California, the largest of which was San Simeon, on which they worked for twenty-eight years (1919-1947).”

Prior to the talk, the Fellows enjoyed a delicious boxed tea from Buena Vida Tea Bar & Garden with scones, sandwiches, and a scrumptious brownie in the Loggia. The house was adorned with beautiful flower arrangements by Fellows Chair Jeanne Anderson. After the lecture, Victoria kindly signed her sold-out book for the attendees. Among the distinguished guests was Lars Stensland who played in Virginia’s tennis court when Virginia hosted parties! A big thank you to our incomparable Jeanne who creates the most inspiring and beautiful events for the Fellows to enjoy! 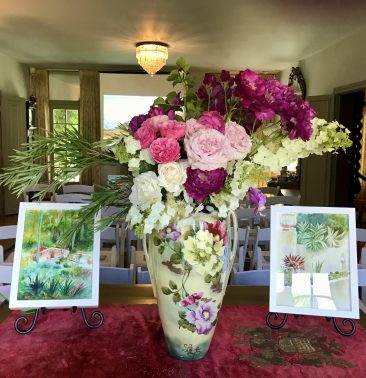 Photos by Linda Meadows
Friends of Robinson Gardens Board Member