Virginia Robinson came to this area as a small child. Because Los Angeles was at a pivotal growth moment ready to burst into a bustling city, she had a tremendous opportunity to help shape the development of this nascent area into a major metropolis with a rich cultural climate. What she did growing up was reported frequently in the newspaper in large part because of her family’s position in the community. Virginia’s two most important early influences were her father, Nathanial Dryden, and her uncle, Leslie Brand. Her father was an architectural designer and builder who had a significant influence on her sense of style. Her uncle, a colorful man who gained great success in his many business pursuits and much notoriety for his glamorous lifestyle, played an influential role in her own business interests as well as her love of living grandly.

Later, when Virginia and Harry Robinson were married, she became even more prominent as a style setter due to his family’s involvement in the community and their cornerstone department store, the J. W. Robinson Co. She assumed a position as an exemplar or an ambassador for the business, supporting charitable causes and cultural events and hosting endless dinners, luncheons, tennis matches and swim parties. And after Harry died, she took a much more active role in the business from the management side of J. W. Robinson Co. She was a truly modern woman perfectly placed to help create the cultural contours of greater Los Angeles and Beverly Hills. She held court at her Garden of Delights home in Beverly Hills from the time she moved in during the fall of 1911 until the 1970s.

After the Southern Pacific Railroad reached Los Angeles in 1876, the city really began to grow into a major urban area. From the beginning of the 1870s up to the turn of the century, the population increased from a little over 5,000 to over 100,000 residents. The following describes a letter of admiration published in the Los Angeles Times on May 4, 1882, only a few shorts years before Virginia and her family moved to the area in 1887 when she was just 10 years old. The author had just returned home to the San Francisco area. The title was, “A Visitor Sees Our City through Golden Eyes.” An excerpt of this glowing review said, “A more beautiful day never dawned than the one which I spent in your city…. Vineyards, orangeries and gardens spread out before us in the highest state of cultivation.  Flowers in endless variety, purple and gold and nameless colors, showing how profuse nature has been with her fingers….” “I was pleased to find the comfort of the travelers so well considered…. The hotels of your city will compare favorably with any in San Francisco.  The Pico, Cosmopolitan and St. Charles are well kept, and a credit to the city.”

The St. Charles Hotel is seen in the center of each of these stereoscopy images.

“The crowds which frequent our hotels of various grades at this time give an air of permanency to the present business boom entirely satisfactory to citizens generally.”  This excerpt of a booster’s testimonial appeared in the Los Angeles Times on August 3, 1882. It was into this fever of optimism and expansion that Harry Robinson’s father decided to branch out from the family business in the Boston area and start anew in Los Angeles. And a few days after the review, another story in the Los Angeles Times mentioned that Mr. J. W. Robinson was staying at the St. Charles Hotel. Seven months later, the Boston Dry Goods Store, the precursor of J. W. Robinson Co. announced its opening. The original store was located at No. 3 Spring Street on the Allen Block. In part, its opening day advertisement described great prices with shipments of new items arriving regularly from the East Coast. A snippet of the ad included such things as “A Splendid Assortment of Dry Goods, Small Wares, Ladies’ Clothing, and Children’s Cotton Underwear, etc.”

Even when Virginia Dryden was a young girl, she along with her mother and sister appeared in many columns in the local papers. The parties and events Virginia attended are too numerous to list. But a few that express her early social development are worth pointing out. One such important event that began in 1894 was the four-day festival, La Fiesta de Los Angeles (later known as La Fiesta de las Flores) which continued every year up to WWI. It drew large crowds. The events were extensively covered in the local newspapers. During the very first one, an article in the Los Angeles Times reviewed the second night dance that was presented in which both Virginia and her sister Ada performed, dressed as geraniums. The report stated that all the performers were costumed as butterflies and bees, along with a “dance of smilax” and the “march of geraniums.” This Fiesta was promoted by the Merchants and Manufacturers’ Association of Los Angeles, in which Harry Robinson’s family and business were important contributors. 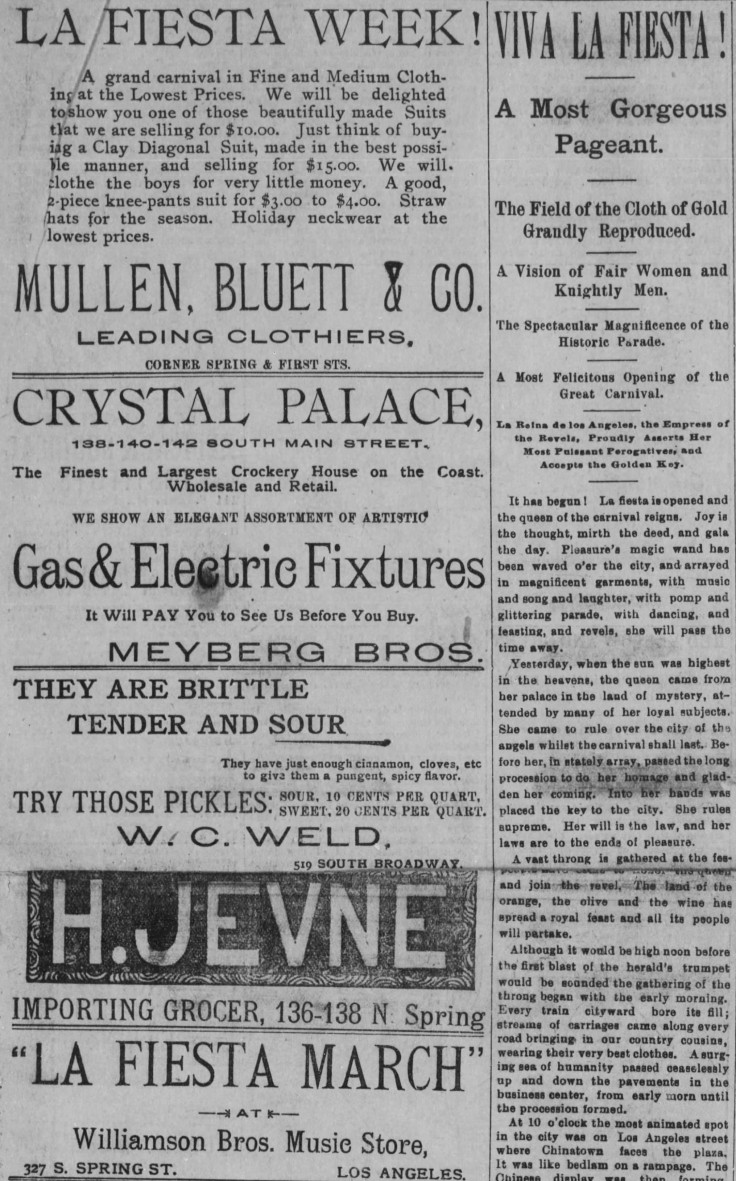 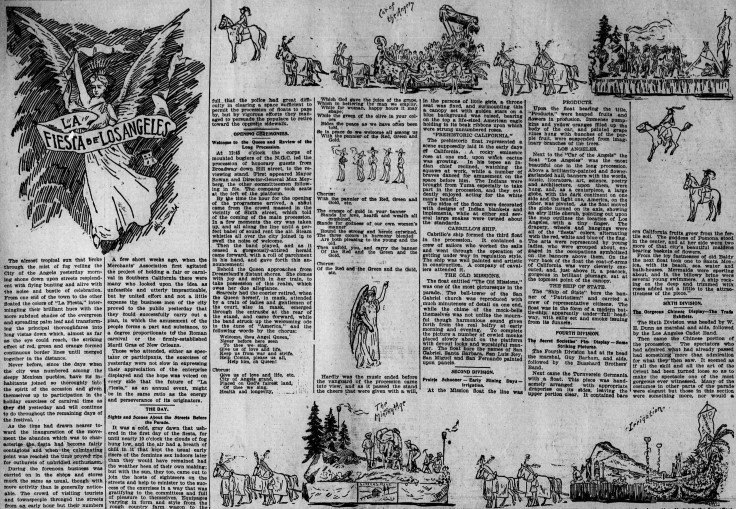 For more details of the above images and this amazing event, please click here.

Virginia also participated in supporting charity events as stated in the Los Angeles Times in June 1896. A large successful benefit for Stimson-Lafayette Industrial School by the Ladies’ Auxiliary took place at St. James Park where Virginia and her sister Ada served tamales from the “handsomest” of the decorated booths.

In addition, that June, Virginia graduated from high school. Her “Class of 96” graduation ceremonies took place at the Los Angeles Theater. A production of “A Midsummer’s Night’s Dream” was performed along with the piece presented by “Miss Virginia Dryden who made a very lovely Titania.” She was said to deliver her lines with “much intelligence.” There are many other mentions in the newspapers during her youth about performances, dances, and parties in which she participated with often sumptuous descriptions of each event’s decorations and activities.

While in school, she became a member of the Delta Iota Chi Sorority. Her involvement continued after her graduation. One sorority event was described in the paper on May 12, 1897. It stated that music and dancing followed their luncheon meeting. Another in July of that year provided a detailed picture of another D.I.X. Sorority event, stating that Miss Etta Janss delightfully entertained the group.  A boat ride in Westlake Park was followed by a business meeting and a luncheon at the Janss residence on Bonnie Brae Street.  The article stated that the rooms were effectively decorated with jacaranda blossoms, heliotrope and solanum, and the violet shade of the decorations was carried outside as well.

In May 1901, a story ran about another La Fiesta Parade. Not only did President McKinley head up the parade, but Virginia was one of the women who were on the important Chamber of Commerce float that was described in the newspaper report as a “bevy of beautiful young ladies clad in immaculate white gowns.” 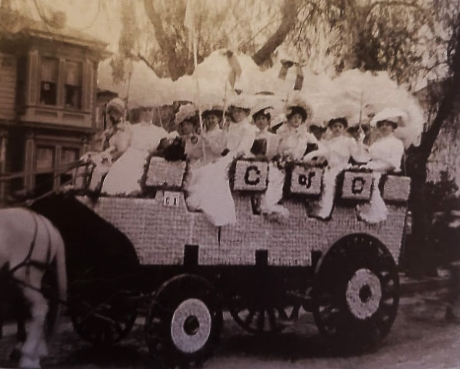 Virginia Robinson (in the middle of the second row) taking part in the 1901 Fiesta de las Flores’ gaily decorated
Chamber of Commerce Float.

All of these events and much more added to her rich cultural development. Virginia was able to take advantage of many sports and other benefits that the mild climate in a beautiful setting provided as well. As she developed into a fashion plate, Virginia still maintained her love of the outside. She said that she thought the best thing that happened in clothing was that sports clothing had become comfortable and useable. Virginia was an exemplar of the Modern California Woman. She could listen to a symphony and the next day go deep sea fishing. And when she and Harry married, she was able to not only carry on her social activities, but she tremendously enhanced her sophistication as Harry and Virginia travelled the world. Life was an adventure, and they both enjoyed expanding their horizons.